Yesterday I baked! I’m a little excited because it’s been close to two months with no baking thanks to packing, moving, unpacking. etc. Baking was my first foodie passion thanks to my grandma Kathy who is an excellent baker. She gave me all of her great recipes, and I’ve also picked up a few new ones along the way. To this day my most requested baked good is her Ginger Molasses cookies. Don’t worry, that recipe is coming your way shortly.

If you’ve been following me on Instagram, you might be aware that Mr. Foodie and I are trying to be good/healthy/restrained in preparation for our upcoming wedding in February. This is relatively hard for people who love food. All food. Like all the time. But we’re giving it a go. One of the biggest challenges is breakfast. Mr. Foodie and I get up at 6am and he has a physically demanding job to go to but hates eating a substantial breakfast so early in the morning. In fact, he doesn’t care for breakfast foods in general unless we’ve slept in and have time to make everything from scratch. He doesn’t, however, have any qualms about eating muffins, cake, cinnamon roles, etc. first thing. But that is not what we want for team #weddingdiet. Since I run first thing in the morning, I have to make myself eat something other than coffee as well, and I’ve found breakfast bars to be my best bet. The problem with most breakfast bars is a) they are high in sugar, b) they are high in sodium, and c) they are expensive. And were I to get even the most healthy ones available we’d still have c) to deal with.

So I consulted the handy Pinterest for some immensely simple breakfast bar recipes that wouldn’t require me to buy a bunch of ingredients I don’t already have and would let me adapt the recipe depending on any “extra” fun ingredients I happened to have each week. The winner? Suburban Simplicity’s Easy Oatmeal Bar Recipe. The list of ingredients for these is shockingly small and I already had all of them on hand (with some substitutions as you’ll see).

I usually don’t like recipes that call for brown sugar because I hate buying a whole bag, having it seize up, and then having to “rehydrate” it when I want to use it again (grandma, if you’re reading this, can you send me one of those clay bears that keep brown sugar fresh again? I lost mine in the move). Luckily this recipe said I could use either honey or brown sugar. I used maple syrup because we are oddly out of honey. Everything else in the base recipe is what I used. When I got to the “add-ins” part of the recipe, I realized that we have fresh grated coconut leftover from our coconut find and half a Hershey’s chocolate bar left over from National Smore’s Day (for which Mr. Foodie and I sat poolside and roasted marshmallows with an extended butane lighter like the classy people we are). So I chopped up the chocolate and sprinkled in the coconut. 19 minutes at 350 (the recipe says 20-25, but I could smell they were done a little early). 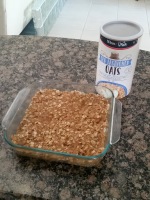 First, I could see why she added the “add-ins” at the bottom – without the coconut and chocolate these would have been really, really, dry bars. Interestingly, I really enjoyed the coconut in these which is odd because I generally don’t like the texture. My recommendation is to keep an eye on your mixture – if it doesn’t hold together when you scoop it out to put it in the pan, consider adding some additional moisture or, like I did, use “add-ins” that will bring moisture once cooked like chocolate bits, peanut butter, or maybe mashed banana which usually holds up well in baked goods. The plus side is that even a small portion is immensely satisfying as a snack or breakfast.

Do you have a favorite breakfast bar recipe? I’d love suggestions!