Mr. Foodie has only ever had lobster once in his life. He explained this while walking with me through the quaint Key West streets toward Duval for Lobsterfest 2016. “It had been part of a surf n turf dinner at a cousin’s wedding,” he said, and when I asked him if he liked it, he said “it tasted sweet.” For many of us, lobster is a once-in-a-lifetime dish thanks in part to its price, but also its sometimes awkward preparation. It is arguably one of the only foods a contemporary grocery shopper has to kill before eating it. Of course you can get prepped tails instead of whole live lobsters, but then there’s that whole price factor again – live lobster is less expensive, and when it comes to these bottom-feeders, every dollar counts.

When I was young, my mother and father would take the boat out through the keys to look for lobster. My mom sat on the bow, her legs dangling off the boat, signaling my dad when she saw either good hiding places or unmarked traps. My dad would pull around, dive in, and catch these clawless keys lobsters with his bare hands. One of my earliest memories is leaning over the side of our boat and seeing my dad with his outstretched hands moving toward a lobster through the crystal clear waters. I can’t remember the first time I tried lobster, but I grew up liking shellfish of all kinds (especially Alaskan King crab legs). So I was more than a little excited about participating in my first Key West Lobsterfest this year.

This year marks the 20th year of the official lobsterfest, although the catching and eating of this crustacean has been a part of the Keys culture for much longer than that. According to fellow keys foodie Victoria Shearer, prior to World War II, lobsters were used only for fish bait! We just had mini-lobster season during which the keys are invaded by an army of enthusiastic amateurs who want to get their catch in before the commercial trapping starts. Then follows the annual Lobsterfest featuring pub crawls, concerts, craft vendors, and, of course, the beloved spiny lobster. According to this article, they were expecting 20,000 people to show for the street fair. Mr. Foodie and I came as soon as it began in hopes of beating out some of the crowds. Without knowing how crowded it got later, all I can say is it was packed. After our hustle from the parking garage, Mr. Foodie and I were thirsty, so we grabbed a soda and decided to wander up and down Duval to check out the options before diving into the various lines we saw. That was mistake number one.

By the time we went up and down the five blocks of vendors, every lobster line was at least 10 people deep with the more affordable lines at least 20 people deep. It ebbed and flowed, so we got lucky with an ‘ebb’ and walked right up to one lobster table only to be told they would not accept credit or debit cards. I was unprepared for this. I expected some of the tables to be cash only, but we quickly discovered that no vendors were accepting credit/debit cards. I haven’t been to a street fair since I was kid that didn’t accept them, but this is the keys and I should have known better. One guy said that since the chips came out, they are having trouble using their old equipment. I don’t know if that’s true, but what was true is that we were now hungry, sweating through our clothes, and a little tired of dodging drunk frat boys and sticky baby hands. But mostly we were just hungry and hot.

Hindsight being what it is, we should have ducked into one of the restaurants many of which were serving keys lobster in various dishes, but as we stared affronted at one vendor’s sign asking for $25 for one tail (really? Maybe at a surf n turf restaurant on the seaside, but here on this hot, crowded side walk?), we caved and ducked into one of our tried-and-true Mexican joints. Not a lobster dish in sight. At this point we had secured some cash from an ATM, but we were so tired, hot, and hungry, that we still went in for burrito bowls instead of standing in the now 20-30 people deep lines. I used our cash to buy a lobster hat instead.

We reasoned that we’d stop off at a grocery store on the way home and grill lobster ourselves. Which we did. Only it was Canadian lobster because they were out of every other kind. We drove home soaked through (it had also started raining on our walk back) with our unamerican lobster tails tucked between our feet feeling a bit cheated, angry mostly with ourselves for botching our first chance to enjoy fresh keys lobster since we moved here. 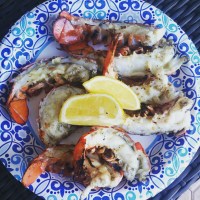 That all faded away once we got home, prepped the lobster tails, and began sipping white wine by the pool while the tails cooked in a mixture of butter, garlic, red pepper flakes, and lemon zest. We only had frozen corn, so we steamed it and melted the same kind of butter mixture over it – though my preference would have been to have grilled ears of corn as well. In any case, we enjoyed the simple meal immensely. The lobster was perhaps a little tougher than I’m used to because they were mini sized (and probably not the freshest things coming all the way from Canada), but the butter mixture complimented the sweet flesh as well as the sweet corn. The charred edges of the pink flesh imparted the smokey flavor we all love of grilled food. And this sweet, buttery, and smokey dish soon worked its magic on an otherwise disappointing day.

Planning a trip to the keys for lobsterfest? Learn from our mistakes and bring on the butter!