Monday was Julia Child’s birthday! I wasn’t aware of this until after I decided to make meatloaf, but I’d like to think I was channeling her genius. Meatloaf is a favorite among mid-westerners, so I am no stranger to it. My grandma has a recipe for this as well and it’s good – it requires few ingredients and stretches the meat as any good meatloaf should. In recent years I’ve begun experimenting with different meatloaf recipes including Ree Drummond’s Italian Meatloaf which is my hands-down favorite. However, rarely do I have on hand all the ingredients that this meatloaf requires unless I plan ahead, so my every day meatloaf tends to be plainer. This week, it was BOGO ground turkey at the grocery store, and I couldn’t pass up 2 lbs of turkey for $4.50. We actually went ahead and got 4 lbs because it was such a good deal.

Good thing we like turkey. Still, I need to get creative to avoid turkey-burnout in the coming days. When we got home, I decided to make a meatloaf since we had leftover bacon from the previous week when they were doing BOGO on that (our grocery store is going through a renovation, so they do a lot of bogos, probably to clear product). In Ree’s recipe, she covers the loaf with pancetta, so I decided to cover mine with bacon. The loaf itself is fairly basic – garlic powder, salt, pepper, one egg, half and half, and panko bread crumbs. Most meatloaf recipes call for some kind of bread – unseasoned or seasoned bread crumbs is fairly common as is bread cubes soaked in milk (as in Ree’s recipe), but I used panko as an experiment because I like the lightness of it in other recipes like oven-fried chicken and the topping for mac n cheese. Mr. Foodie warned me that ground turkey meatloaf can be very dry since you don’t have the fat from the meat like you do with beef. But I was fairly confident that the half and half and bacon would keep it from drying out.

Traditionally the sauce or ketchup serves to moisten what might be a dense, somewhat dry, concoction, but Ree’s sauce does more than that – takes her meatloaf over the top! I decided to amp up the flavor profile of the sauce for this basic dish by using a few tablespoons of a favorite bottled bbq sauce before popping it in a 350 degree oven for close to an hour.

The loaf itself was characteristically firm enough to cut into slices, but each slice was so light and yet so moist. It seemed a miracle that it was holding together at all, but it was. The meat had its satisfying turkey flavor, touched lightly with the garlic powder. The bacon and sauce added richness and spice. Mr. Foodie and I ate in silence, sighing with pleasure every so often. 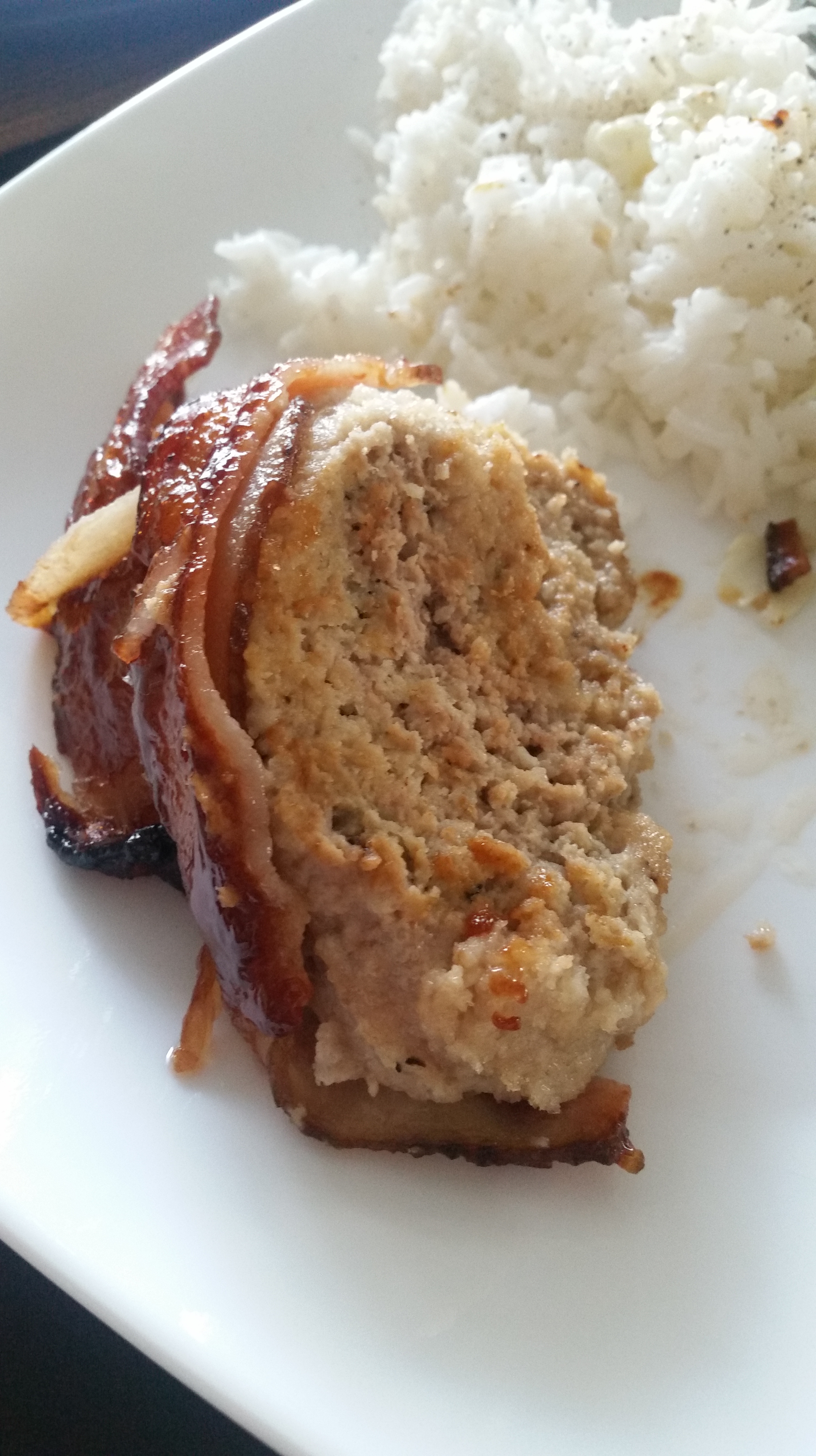 Now that is what I call a good kickoff to a series of ground-turkey dinners! This week I’m also making my cannellini bean and kale soup (with ground turkey) and Mr. Foodie is busting out the grill to make his famous Roasted Red Pepper Burgers – I can’t wait!

5-6 Bacon slices cut in half

3 Tablespoons of your favorite BBQ sauce

Bake at 350 degrees for an hour or until juices run clear and bacon is crisp.