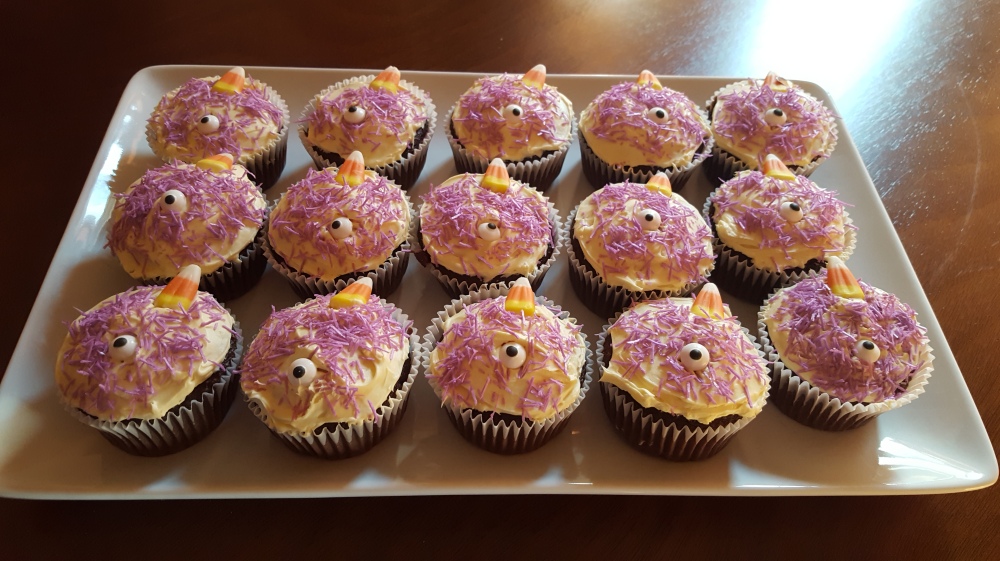 This weekend Mr. Foodie and I hosted a small Halloween-themed game night! We are lucky to have friends who like to play games on the regular. At first, though, we weren’t planning to make it a “Halloween” game night, but we had been batting around Halloween cupcake ideas for a few days – unsure of what to make or when to make it or who to share it with. Then we spotted these purple candy shavings in the baking aisle alongside the candy eyeballs and, voila, flying purple people eater cupcakes were born! As we conceptualized the cupcakes, we remembered the song said “one eyed, one-horned, flying, purple people-eaters” so we went with the handiest horn-shaped candy: candy corn. I found no easy way to incorporate the “flying” part of the creature, but my thought was to cut small bat wings from paper, glue them to toothpicks and stick them in the sides – cute, but more effort than I was willing to commit at the time. We used a chocolate cake box mix because I’m a fan of simplifying when the decorating will consume most of the production. Don’t let perfection be the enemy of good! They turned out pretty cute, right? 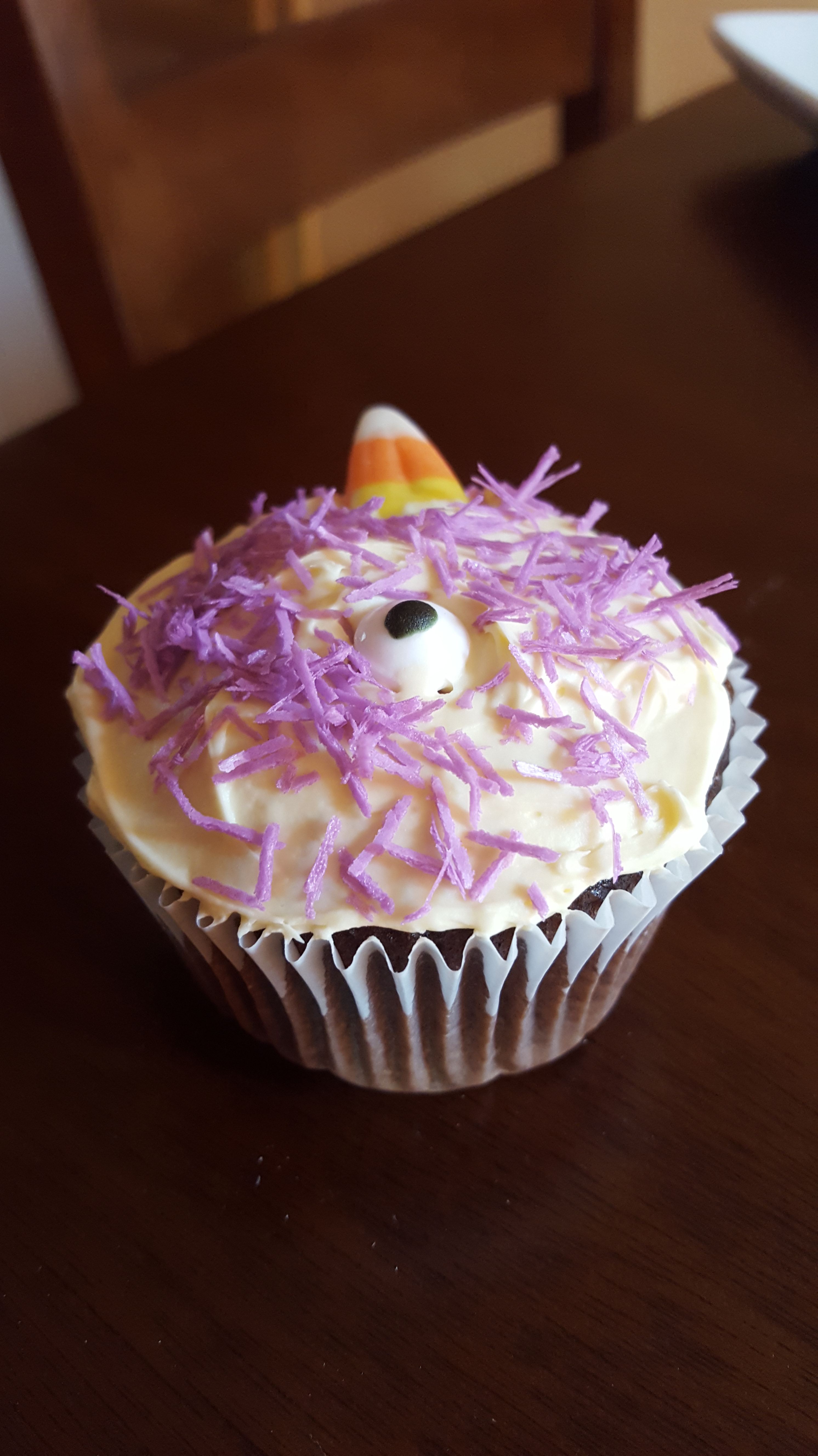 Since we were “going for it” with the Halloween theme, I decided at the last minute to make my Monster Eye Deviled Eggs. I absolutely love this dish for Halloween parties. Deviled eggs are inexpensive, easy, and everyone loves them. I’ve written before about my recipe and general adoration for all things deviled egg. This time I squeezed a few drops of green food coloring into the egg filling to create the monster pupil. Usually I have red food coloring on hand to draw red “veins” on the egg white, but I had to settle for yellow this time. The sliced olive gives definition to the pupil. To make it even more monstery, add a tiny piece of roasted red pepper to the middle of the olive to echo the red veins. To cut down on food coloring, you could always mix avocado into the egg mixture (in place or in addition to the mayonnaise/mustard), but I like the basic flavor of my deviled eggs. 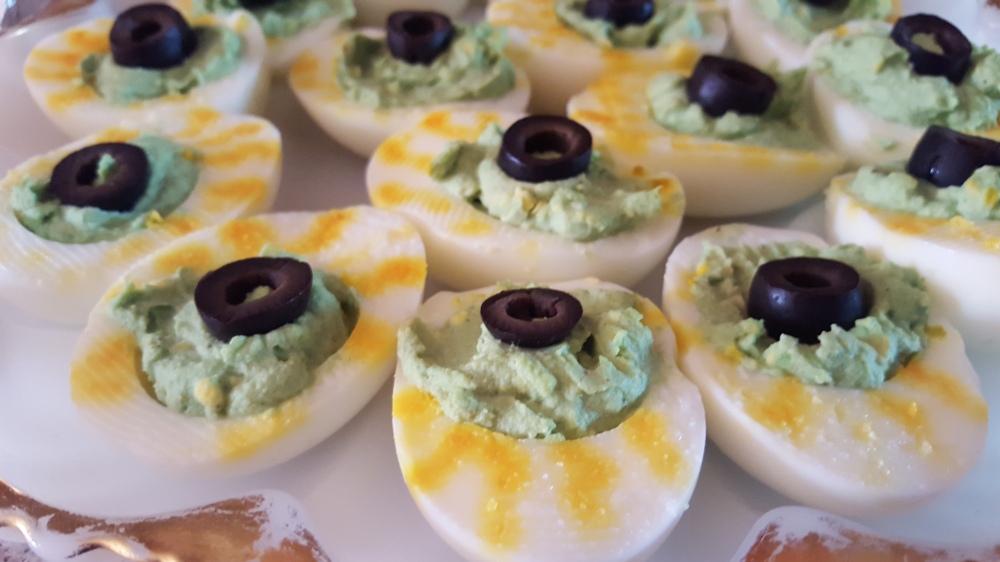 To round out our party, we made Shrunken Head Rum Cider with apples, apple cider, and spiced rum. Weeks ago Mr. Foodie had the idea of making shrunken heads with some of our apples. These were very fun to make. I peeled the apples first, cut them in half, cored them, and then Mr. Foodie cut the faces into the round side of each apple half. Soak them in a lemon juice/salt mixture and then bake at 250 for 90 minutes. To amp up the creepy nature of the heads, and lend flavor, push whole cloves into the eyes and/or mouths of the heads. (Inspired by Heather’s recipe for the same). 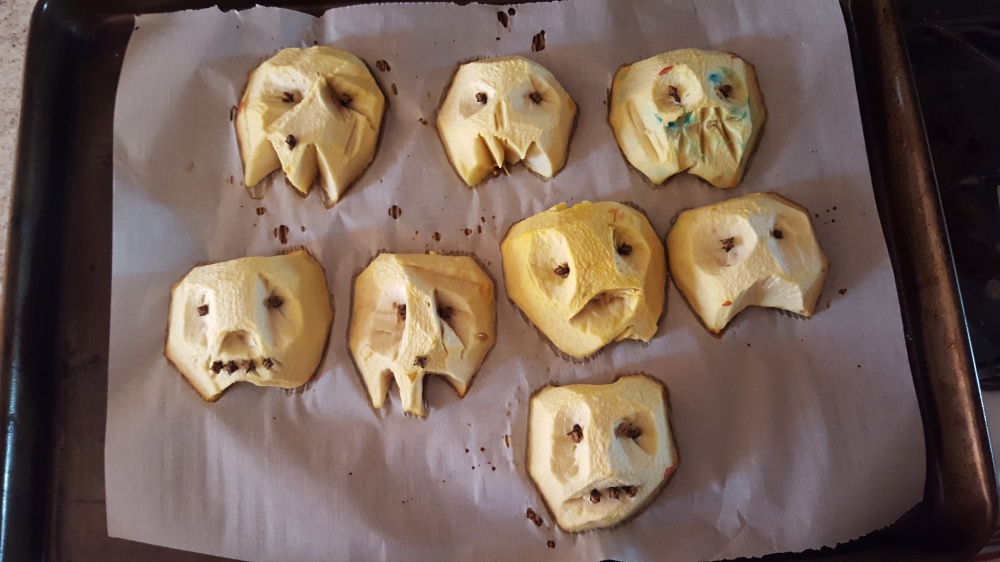 For parties, I like having one “signature cocktail” in addition to the usual beer, wine, etc. This way you have a pre-mixed drink, ready to serve the minute people walk in the door. Punches make me happy. I like the history of punch, the wide variety of punches, and the ease of making punches. The “hardest” part of a good punch is remembering to freeze a sizable ice cube to put in the punch. Find a container (plastic is best) that is at least a few inches wide, tall, and deep. The bigger the cube, the slower it will melt in the punch and the longer you punch will remain cold. If possible, freeze one of the ingredients of the punch itself to avoid diluting your punch with just water. I froze a cube of apple cider because my punch was just that – apple cider and spiced rum. Variations of this punch call for you to heat the cider with whole spices, which sounds delicious, but I was going for ease so I just poured 2 to 1 chilled apple cider and spiced rum (we used Cracken). It was a hit! Beware, it is deceptively cider-flavored and the rum will sneak up on you. 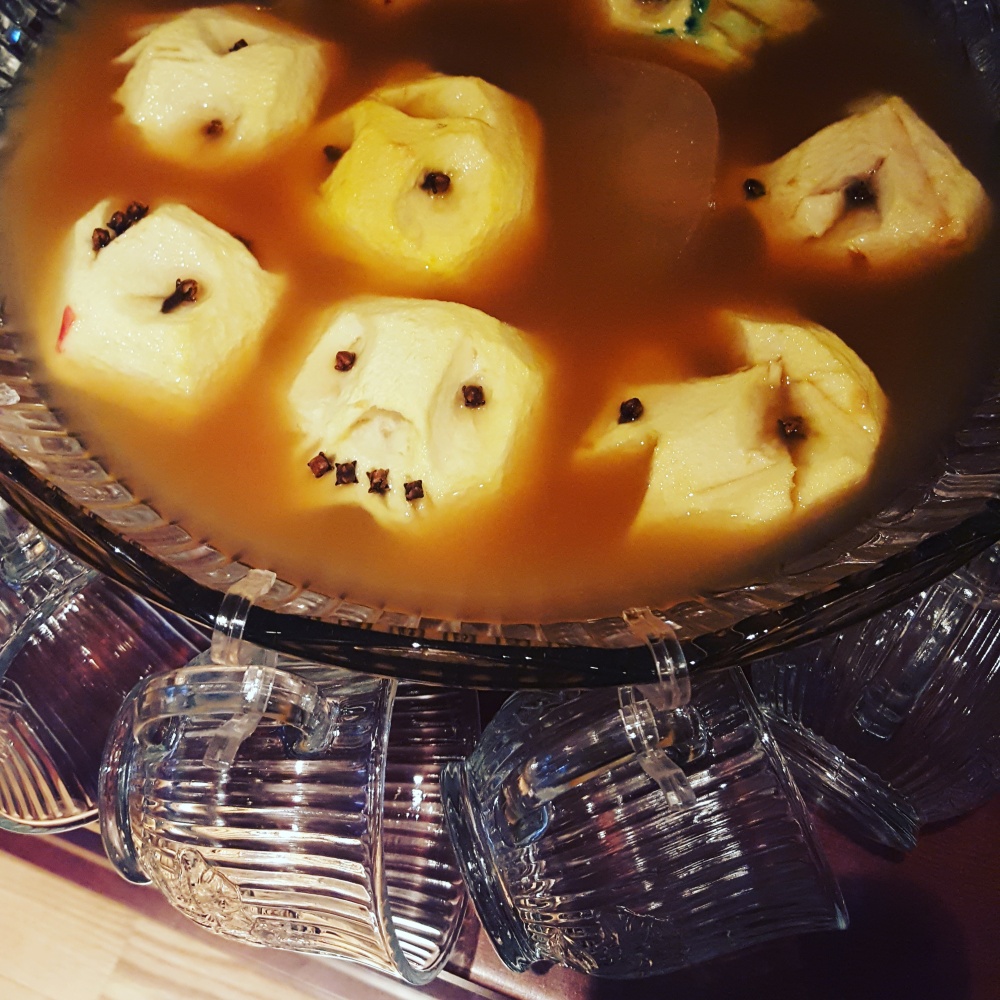 Is there anything more fun than Halloween party food? I will admit to trolling pinterest throughout the whole year looking at Halloween food pins just for fun. When it comes to highly stylized foods for a theme party, try not to overwhelm yourself. Mr. Foodie and I were tempted to pile on, but we simplified where possible (hello, cake mix) and stuck with our original, easy, stir-fry for the main course, so we could enjoy prepping and decorating these three dishes.

Game night was so much fun! We played only the most inappropriate games including the relatively new Joking Hazard which was a blast because of the story-telling aspect of it.

What is your favorite Halloween treat?