As I wrote about in the post-honeymoon post earlier this week, Mr. Foodie and I received a ton of awesome wedding gifts, many of them kitchen items of course. And we are determined to utilize each and every one in the coming weeks so we can familiarize ourselves with new recipes and express our sincere gratitude to our wonderful family and friends for supporting our cooking/baking habit!

This week we whipped out the spiralizer Kitchenaid attachment sent to us by my Aunt Katie. We are on our way to acquiring nearly all the attachments made for the Kitchenaid mixer, but I feel like this is going to be one of our most frequently used attachments from now on. I admit that I didn’t immediately see the benefit of spiralizing veggies apart from the simple novelty of eating them in a different form, but after tasting the spiralized zucchini, I became a convert!

Others have explained it better than I could, but there was something immensely satisfying about slurping these lightly cooked and lightly seasoned “noodles” of zucchini. My mind is already spinning with ideas for our next spiralizing adventure.

Of all my attachments, this one looked the most intimidating at first. It consists of entire box of parts and pieces, but it only took us a few minutes to read over the directions and find the right blade to make medium sized noodles. We happened to have VERY long zucchini, so I had to cut them in half in order to fit them into the attachment, but it still took just a few seconds to spiralize the whole zucchini. Afterward, you only have two pieces (the blade and the stake that holds it on) to clean, so that is a major plus in my book.

It was a week night, so I went super simple, deciding to simply saute the zucchini noodles with some light seasoning – salt, pepper, and garlic powder. It occurred to me that I could make a version of our favorite way to eat zucchini with onions, but I wanted to see how these noodles tasted on their own. Other recipes I saw said you could eat them raw with a sauce like pesto, so that is an option for another day.

This cooked version had a consistency remarkably similar to pasta. I dropped a coin of olive oil in the pan and divided the zucchini into two batches to avoid steaming it. I sprinkled each half with a little salt, pepper, and garlic powder. Each half only took 3-4 minutes, tossing with tongs to ensure even cooking. I sprinkled the final product with a pinch of Parmesan cheese to add a salty, creamy lick to the top.

Mr. Foodie and I literally woolfed them down. We at every last noodle before we even touched our burgers. I could easily imagine eating an entire bowl of these all by themselves. Even Mr. Foodie, who doesn’t generally care for anything in the squash family, ate these noodles with gusto. 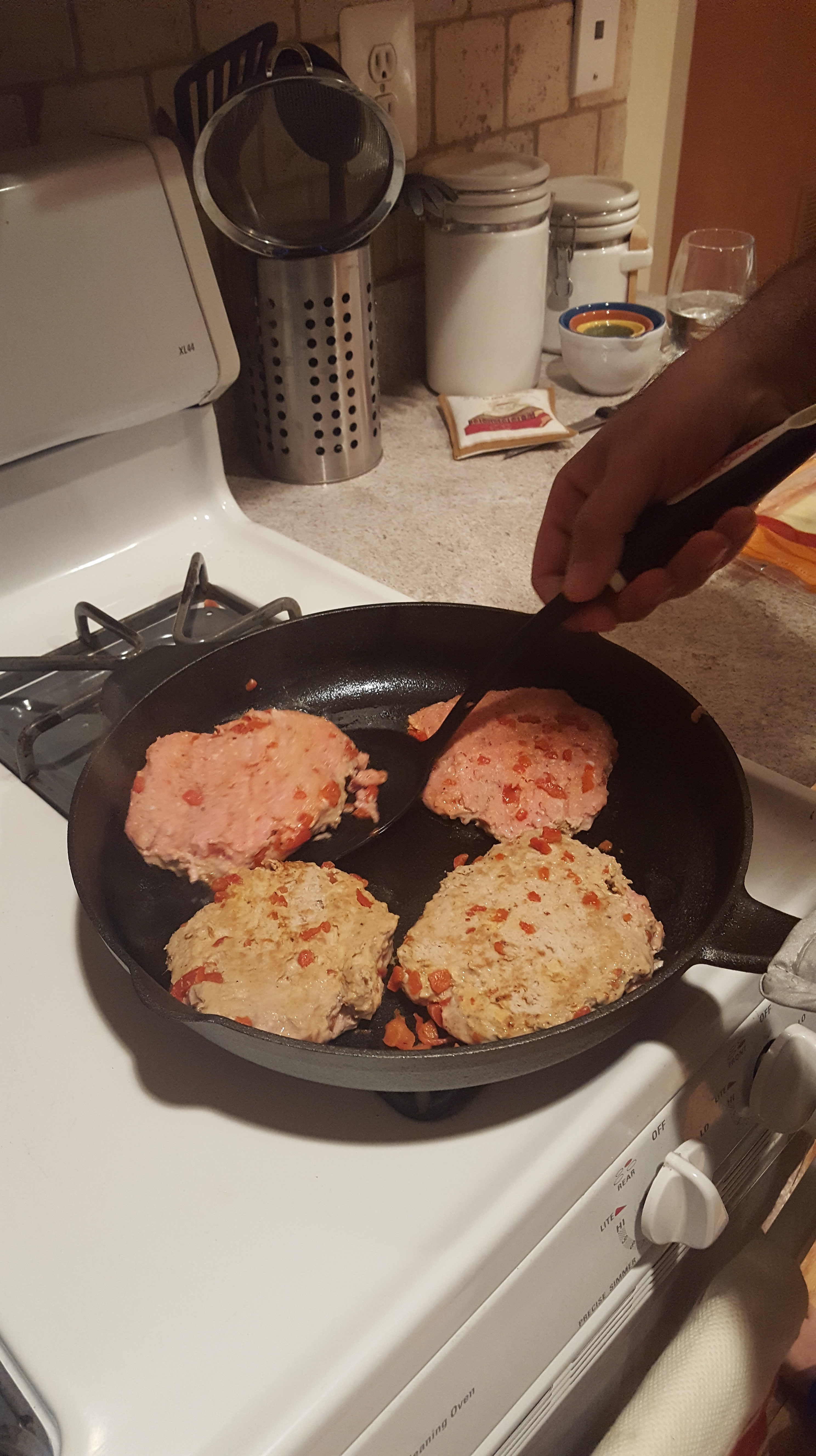 I also wanted to report that we used our brand new cast-iron skillet for Mr. Foodie’s Famous Roasted Red Pepper Turkey Burgers. I have wanted a skillet for years, but found myself a little intimidated by the care of it. Luckily Mr. Foodie’s brother presented us with this skillet and some good advice for using/maintaining it. The burgers were as lovely as I remembered them and a great compliment to the star of this show – the zucchini noodles!!

Spiralize the zucchini, keeping the skin on. Heat olive oil in large skillet over medium-high heat. Divide zucchini to avoid steaming and cook each half 3-4 minutes until browning occurs. Season each half while it cooks. Sprinkle pinch of Parmesan cheese over the finished batch. You may want to cut some of the noodles as they can come out quite long.

You can find the recipe for Mr. Foodie’s burgers here:  https://flkeysfoodie.com/2016/08/23/poolside-eats-roasted-red-pepper-burgers-and-grilled-corn/

For more Foodie adventures, check out our instagram – we moved to a new handle to reflect our new living situation: @fairfaxfoodie