I’ve heard before that the world breaks down into two kinds of people. Those who like to be taken care of when they are sick and those who do not. I am squarely in the second camp. At least I was until Mr. Foodie came along. The first major head cold I suffered, he was right there, making me tea with honey and restocking my bedside tissues. Somehow, I didn’t mind that he was seeing me in this vulnerable state, and somehow I started to like his quiet doting. Mr. Foodie was down for the count earlier tonight, having broken the new house rule to never ever purchase hot food from 7-Eleven. Sometimes he forgets he doesn’t have the stomach (or the metabolism) of a 20-year-old anymore. In any case, he was doubled up with stabbing pains and unable to find a comfortable position. I flapped around uselessly, offering him water and aspirin and trying to shove pillows in strategic places. I admit I am not inherently the best caregiver. As a former person who would rather hole up when sick instead of accepting help, I find I am sometimes stingy with sympathy and attention when it comes to illness. I remember being anxious about it before Mr. Foodie first fell ill. I worried that he had been babied by his loving mother and would expect similar treatment from me. It turns out, when you do genuinely love someone, you do not mind caring for them when they are sick. Mr. Foodie is fairly stoic when he is ill, so that helps.

Today, however, I felt like the QUEEN of caregiving after I baked this new recipe! I had already planned on making a recipe from the Ellis Island cookbook that I received as a gift a while back, but it came in super handy on this particular night. After Mr. Foodie’s stomach pains subsided, he had no appetite and was afraid to even try to eat anything. Except for my soda bread. I gave him little pieces, one at a time, until he started feeling even better. This will surprise no one who understands the magic of baking soda, but the bread helped settle his stomach and eventually brought back his appetite.

Additionally, it was delicious! This particular recipe was sent in for the Ellis Island cookbook project by a woman who described her mother as one of the most warm-hearted caregivers in the world. She was always hitting the pavement to raise funds for the community, bring turkey dinners to families in need, or welcome new Irish immigrants home with her for some cabbage. I felt a wave of gratitude pass over me as I made this recipe tonight for that woman’s bravery and kindness. In a world that looked down on her and those in her community, she held her head high and just kept feeding everyone.

Although this cookbook is not fancy, contains some rather vague recipes, and lacks mouth-watering photos of the food, it is one of my favorite cookbooks to read. Preceding almost every recipe is a letter – usually sent by a friend or relative of a household cook – detailing the memories of being a first-generation immigrant to come through Ellis Island. Many of the stories are heartbreaking, but many are also immensely inspiring and uplifting. The recipes tell me so much more than just how to make something. They reveal the dire circumstances of many who came here looking for a better life. They reveal cultural traditions adapted to new ingredients. But mostly they reveal the resilience of the human spirit. 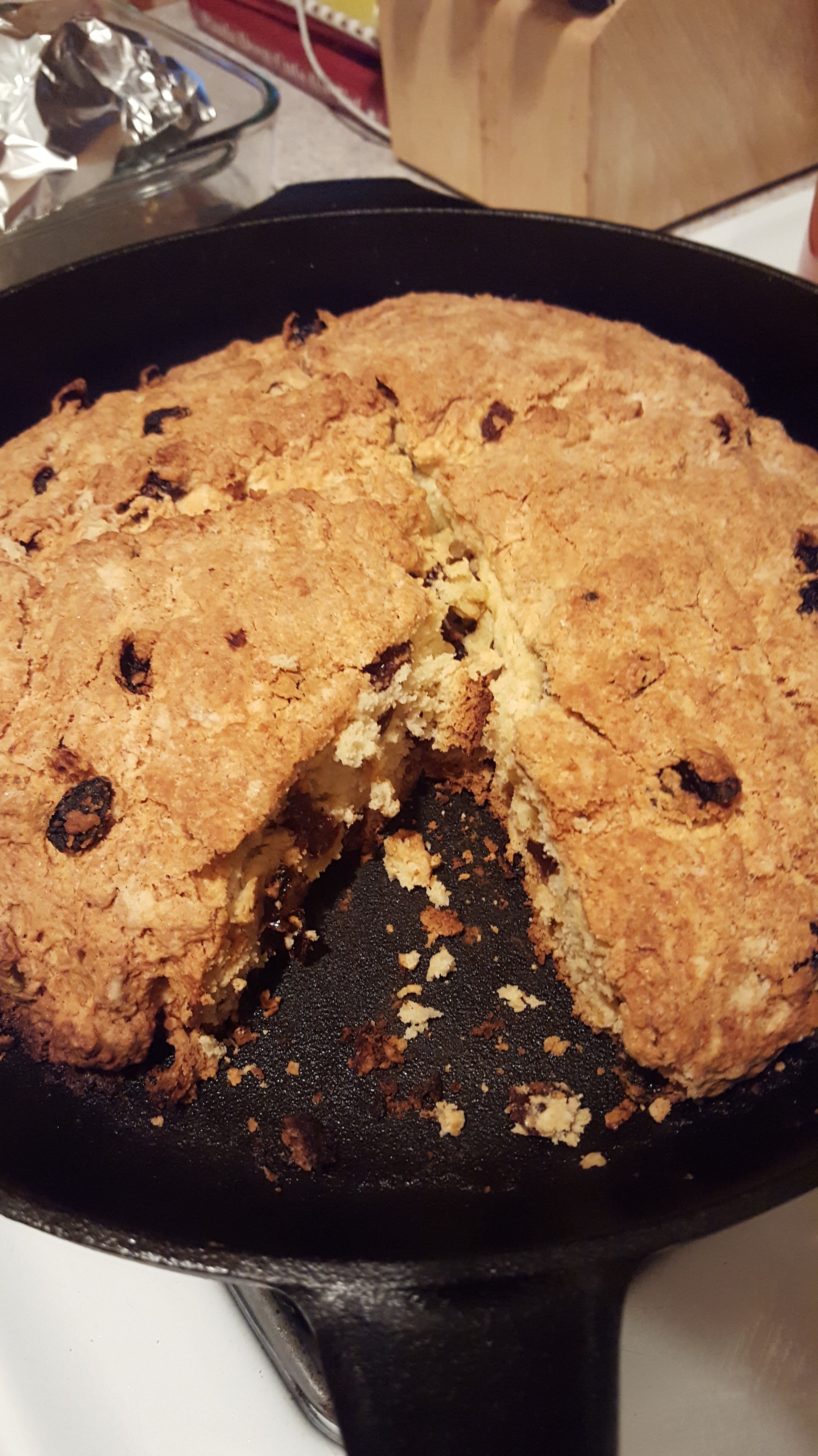 For this soda bread, we used our cast-iron skillet. The only “unusual” ingredient besides the caraway seeds is buttermilk, but no need to buy buttermilk specially for this bread. Just take a cup of milk and let it sit with a tablespoon of vinegar or lemon juice for 5-10 minutes and voila! Buttermilk. You don’t even need to let any butter soften because it calls for melted butter, so woot! Basically, you mix all the dry ingredients together, make a well, pour the wet ingredients in, mix with a wooden spoon, and then plop into a buttered oven-safe skillet for an hour at 375. Before putting the skillet in the oven, cut a cross on the top and baste with some additional melted butter. We did not have caraway seeds on hand and I couldn’t say with certainty that I’ve ever even tasted them before, so I am not sure what flavor element was missing. But the slight sweetness of the raisins and the buttery lightness of the bread were simply wonderful. While I can’t taste the baking soda and powder, you can definitely smell it on the bread and see its work in the airiness of the bread’s interior. And, of course, you can see its effect on an upset stomach if you have a silly 7-Eleven-eating-husband lying around.

The bread settled his stomach and brought back his appetite. Which is a good thing because I had also made sauteed cabbage and pork chops for dinner. The pork chops are just seared quickly, then baked alongside the soda bread for 30 minutes (don’t forget to let them rest under some tin foil before cutting). The cabbage is one medium head, core cut out, and sliced thinly as for slaw. Cook in some butter (or bacon fat if you have some) and season to taste. I used salt, pepper, and garlic powder – it was freaking delicious! One of my new favorite ways to eat cabbage now.

So there you have it, a week-night Irish meal that isn’t shepherd’s pie or beef stew.

For the soda bread, see the recipe snapped from the book below. For more Fairfax Foodie adventures, follow us on instagram @fairfaxfoodie