What a week! Mr. Foodie and I both suffered a little random bad luck this week, so we were all too happy to drown our sorrows in tacos and beer last night. Someone hit my parked car at work and did NOT leave a note, but unfortunately for them (and fortunately for us) our building manager caught the incident (and their plate #) on tape, so boo-yah! to the inconsiderate person who hit my car and drove off. Also, Mr. Foodie’s phone died, so he took my upgrade and got a new Samsung 7. Bad luck for me, but not for him – Mr. Foodie loves new toys. It’s actually kind of funny how into new gadgets he is. Picture Gollum stroking his ring and saying “my precious.” Lucky for me, it wears off fairly quickly. It did, however, cause some marital discord this week when, in an effort to keep his new phone “pristine” he deleted some pictures of our dinner before I had the chance to email them to myself. So you’ll just have to be satisfied with my description of our cabbage steaks and potatoes* instead of the awesome photos I took.

We were so pleased with our bbq pulled pork shoulder in the crockpot from last week that we decided to do it again this week, but to change up the flavor profile for tacos. We prepped the shoulder the same way as last week, but we seasoned it instead with chili powder, lime juice, salt, cumin, garlic (we used fresh, but powder would be fine for this rub) and 1 1/2 cups chicken broth (you could use beer also, but we drank ours before we got it into the crockpot lol). Again, we eyeballed the measurements, but just know that we only used around a tablespoon of most of the seasonings and four limes worth of juice. We omitted the onions on the bottom this time, but that might not be a bad addition next time we make it.

For an appetizer we wanted to make homemade guac because a) we love it and b) we just added cilantro to our wall herb planter!  The only catch is that Mr. Foodie has developed an intolerance to tomatoes in almost every form except ketchup (which let’s face it is barely made from tomatoes). I’ve never made guac without them, and to be honest, I usually make guac with the powdered mix. This time, though, I wanted to experiment. I did find a tomato-less recipe for guac online, but I adapted it so I wouldn’t have to buy extra ingredients. For this recipe, I cubed the guac (see the easy way to do this) and squeeze lime juice from four limes over it (these weren’t the juiciest limes ever, but you need to make sure you have enough to cover every bit of that avocado so they don’t turn brown on you – the last think you want your guac to look like is baby poop lol). I added a good amount of salt (guac can stand up to quite a bit because it is so creamy) and I added finely minced fresh garlic. I also took the smallest onion I had, cut it in half, and diced one half finely. Lastly, I added a handful of cilantro, roughly chopped. Then I took the potato masher and mashed it all together. It was delicious. I didn’t even miss the tomatoes. 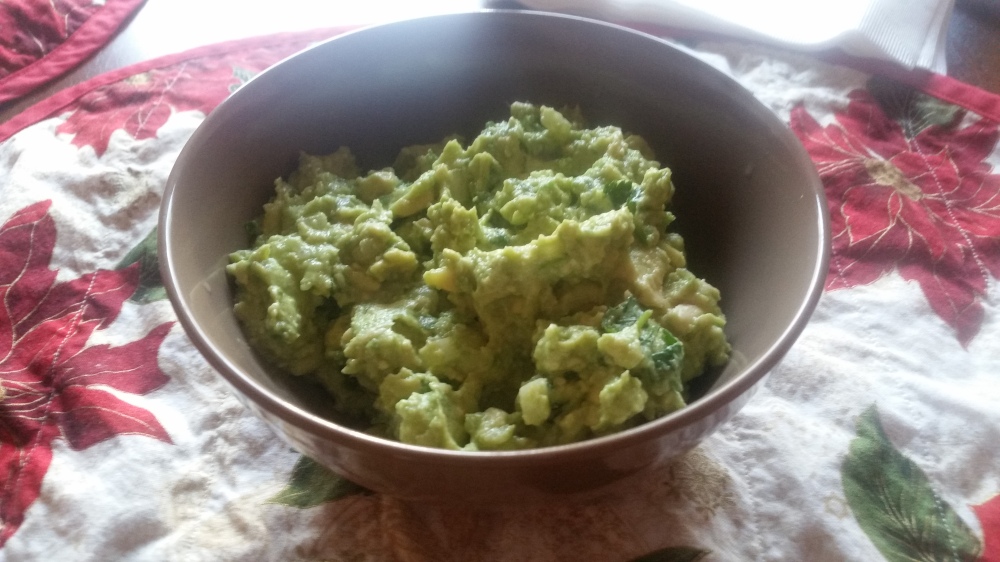 For the Southwest salad, we really just used what we had plus some bell peppers. I diced the other half of my onion, tossed that in with a can of washed, drained black-eyed peas and two diced bell peppers (one yellow, one red). We had romaine, so we used romaine. our recipe made a big salad, so pick a lettuce that will be okay the next day so you can enjoy the leftovers. We made our own dressing as well – just olive oil, lime juice, salt, pepper, and some cayenne. I admit I tried-and-errored it until I got the flavor right. You should have roughly equal amounts of lime juice and olive oil. If you add heat, you might want to add some sweetness (different recipes call for either sugar or honey, but agave might be good too), and remember that you can always add more salt, but you can’t subtract it once it’s in there. Put in a lidded container so you can shake to mix it up. It will separate if you make it ahead, but then just shake it again before you dress the salad.

Last but not least, the tacos! The pulled pork turned out wonderfully again – crockpots are the best!  I didn’t want to mask the taste of the delicious pork, so I served it with only three toppings – a bit of crystal hot sauce, some small scoops of the guac, and some shredded cheese. I like crunchy tacos and Mr. Foodie likes soft. We are going to experiment next time with corn tortillas which I’m sure will be lovely. 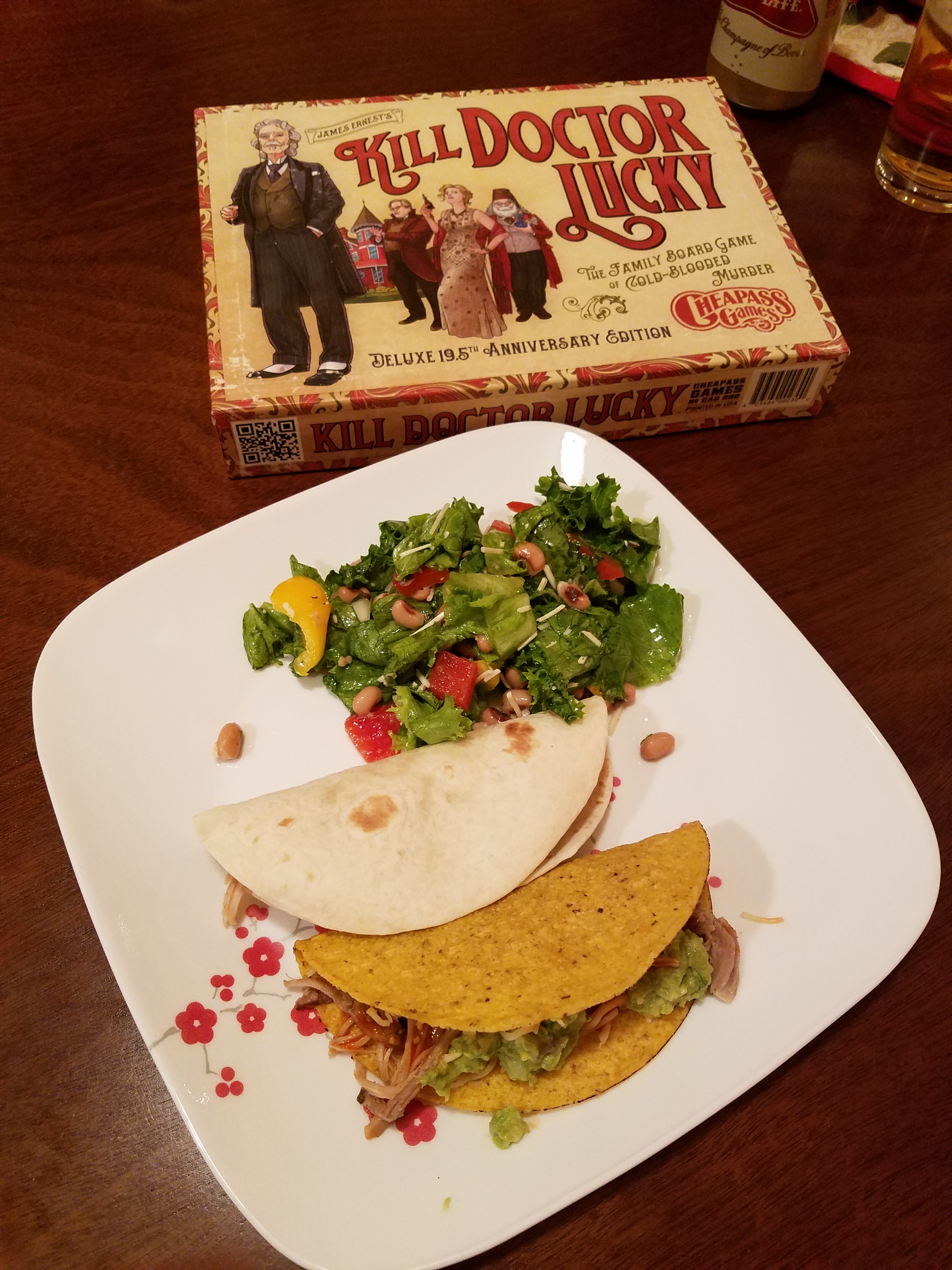 We also played a new board game called Kill Dr. Lucky which has been around for many years, but is new to us. It is kind of like Clue, but where you are trying to kill a character instead of figure out who killed him. The turn-switching thing got the better of me, but that might have had more to do with the beer than the game 😛 I ended up winning, so all’s well that ends well!

*We used this Roasted Cabbage w/ Bacon Gremolata recipe because I can’t get enough of cabbage and I’m always looking for new ways to cook it. We tried sauteeing it a few posts ago and it was delicious. This way is easy because you slice it like a cut of steak, brush olive oil and salt/pepper on it (I might add red pepper flakes next time) and roast it at 400 for 30+ minutes (check for crispiness), flipping half-way. The gremolata was easy to make – just finely chop up some crispy bacon (or bacon substitute if you want to go veggie), zest 1 lemon, mince fresh parsley (we used cilantro because it’s what we had!), and I added some parmesan cheese instead of the almonds because…we didn’t have them lol I can’t stress enough how much you shouldn’t let absent ingredients stop you from trying a new recipe. Google “substitute for..” and you’ll find an answer for just about everything. The cabbage “steaks” were wonderful! The crispy edges were caramelized, and the cabbage was perfectly cooked in the middle. The gremolata added this zesty, salty flavor to the cabbage that was to die for. To stay veggie and keep with our “steak and frites” theme, we made simple, roasted potatoes to go with it. It was a lovely almost-meat-free (maybe meat-light is a better term) weeknight dinner.