After perhaps the longest work week of my adult life, I am so unbelievably happy to be watching the Food Network in my jammies and blogging this morning! It was a bit of a lackluster cooking week because both Mr. Foodie and I were hella busy, but he did throw together an awesome new soup that we are calling ETP Soup – “empty the pantry soup.” It had black-eyed peas, kale, and chicken, but the exciting part was the base – sauteed onions, garlic, and red pepper flakes + homemade chicken stock, of course! It was just the ticket when I came home after a long day at the office. We popped the sliding glass door open, plugged in the twinkle lights, and sipped our delicious soup! I wish I had a picture of it, but we’ll just have to be satisfied with a word-picture lol

The weekend started off on a good note with some chill time with some of my girlfriends and a trip to the winery where we got married! My mom is a club member there, so I volunteered to “pick up” (aka drink) her latest wine shipment. It was so sunny that all my pics were washed out, but the wind kept it from being too warm – and overly crowded.

When I got home, Mr. Foodie was starting dinner – is there anything better than a partner who cooks?! – which consisted primarily of a version of chicken Parmesan and, again, miscellaneous pantry sides because we have yet to get groceries for the week. It turned out incredibly delicious! After dinner we snuggled on the couch and watched Indiana Jones and the Last Crusade – such a good movie. I needed that day/night SO much. 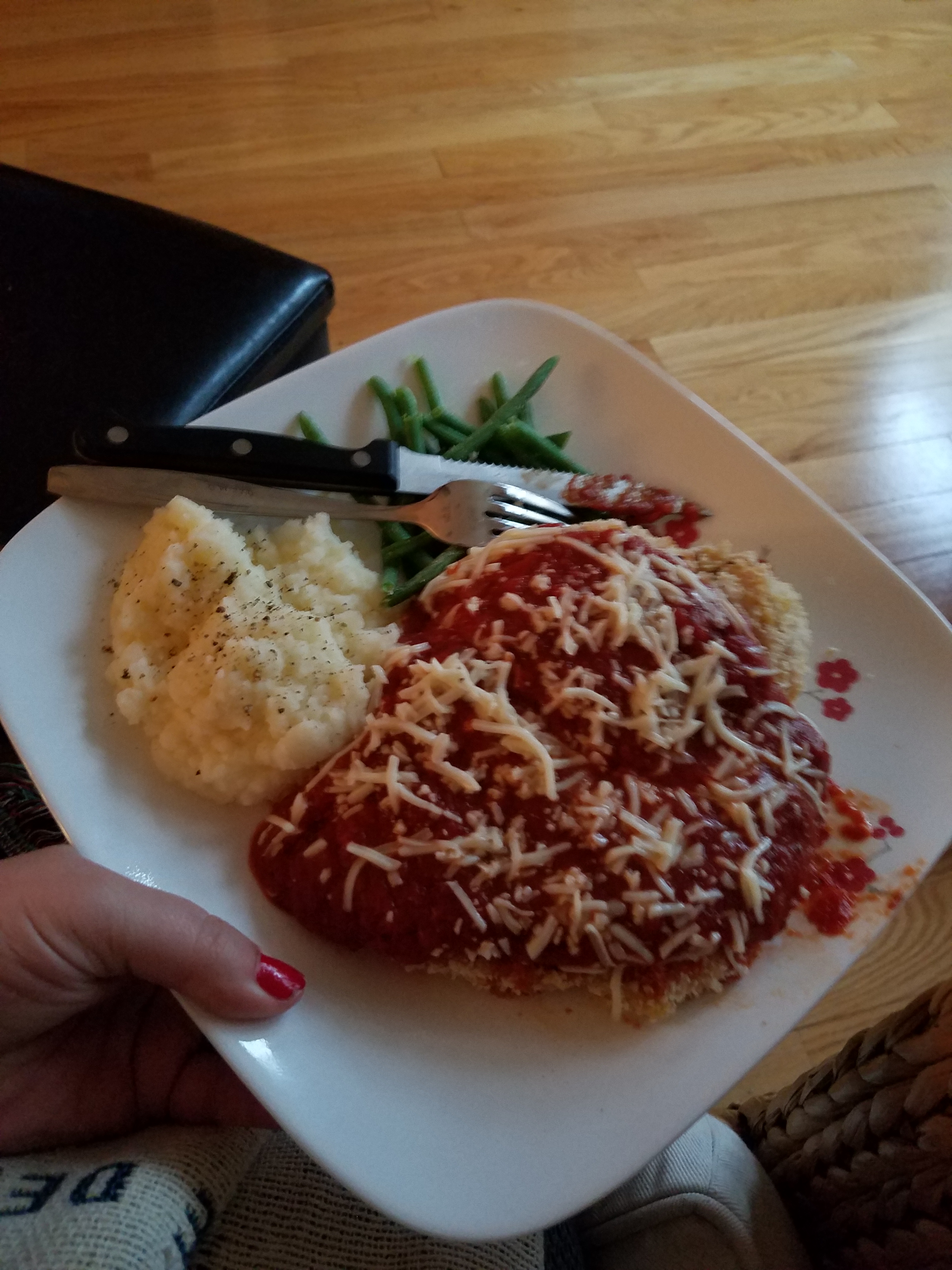 Mr. Foodie did not have any Parmesan on hand when he began his dinner prep, so we made do with shredded mozzarella. We used our new meat tenderizer to flatten two chicken breasts inside a plastic bag (this is fairly standard for chicken parm, but also helps speed up the cooking time/keep it consistent). He dredged the flattened breasts in an egg mixture and whole wheat panko bread crumbs which he seasoned with salt and pepper. Instead of frying the chicken, he baked it at 350 for 30 minutes. It was perfectly cooked and crunchy when he poured the tomato sauce over the chicken and sprinkled with the mozzarella. Then he popped it back in the oven to heat the sauce and melt the cheese. He maybe put a little too much sauce on for my taste, but he LOVES things covered in sauce. In any case, it worked wonderfully – it didn’t compromise the crunch of the panko breading in the least. The chicken was juicy, the breading was crisp, the sauce was tangy, and the cheese was perfectly creamy. You can see where a little salty/nutty parm would be a good addition to that mix, but sometimes you just have to work with what you got.

Last week we picked up a huge pack of chicken breasts and since our cooking last week was haphazard at best, we still have a LOT of chicken to work with. So this week we are finding some creative ways to utilize all this chicken without getting bored. What Mr. Foodie doesn’t know yet is I’m planning to make my first ever green curry chicken this week. Green curry is our favorite Thai dish, so he’s in for a treat!

For more Fairfax Foodie adventures, check us out on instagram @fairfaxfoodie (where I promise to update it a little more often this week lol)